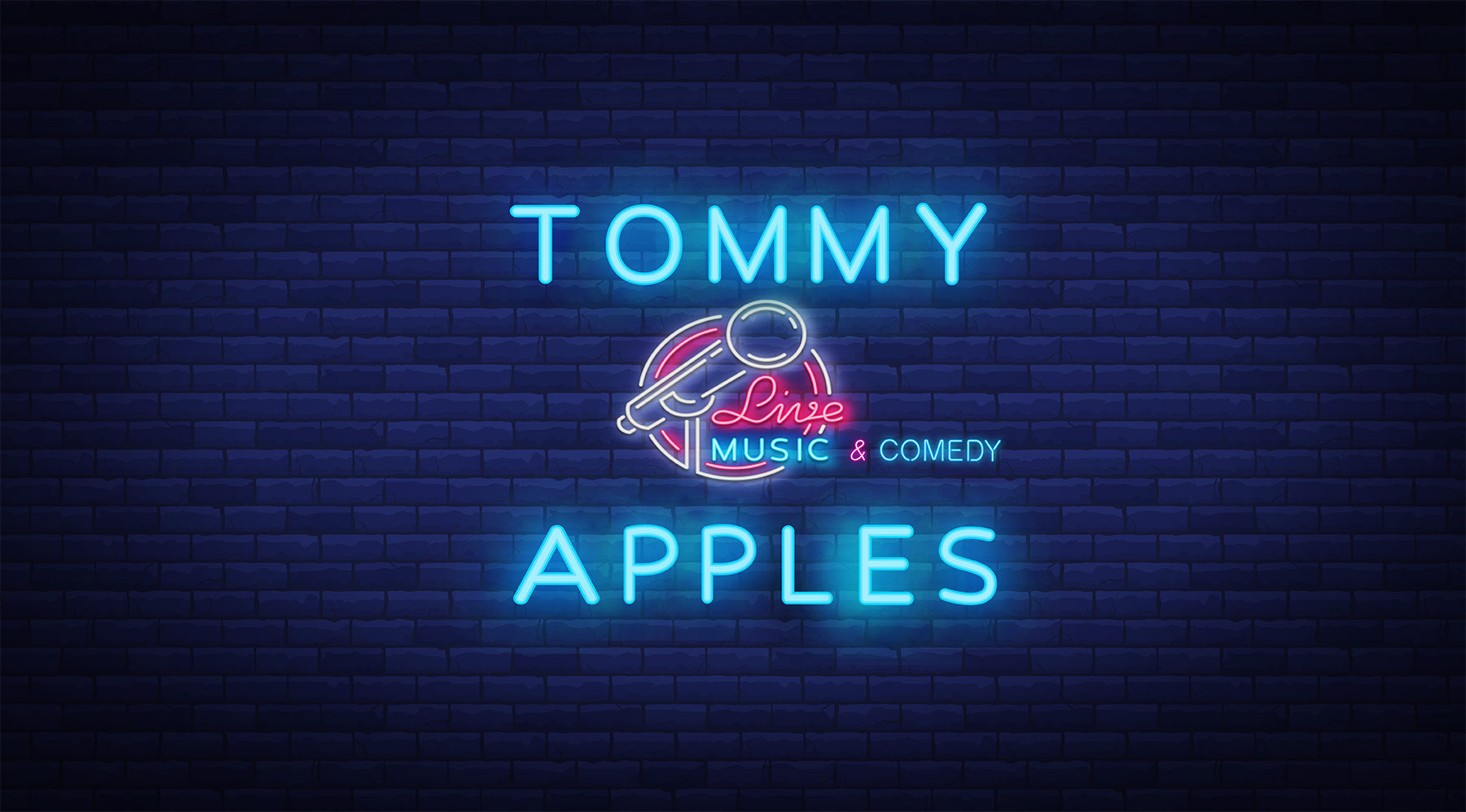 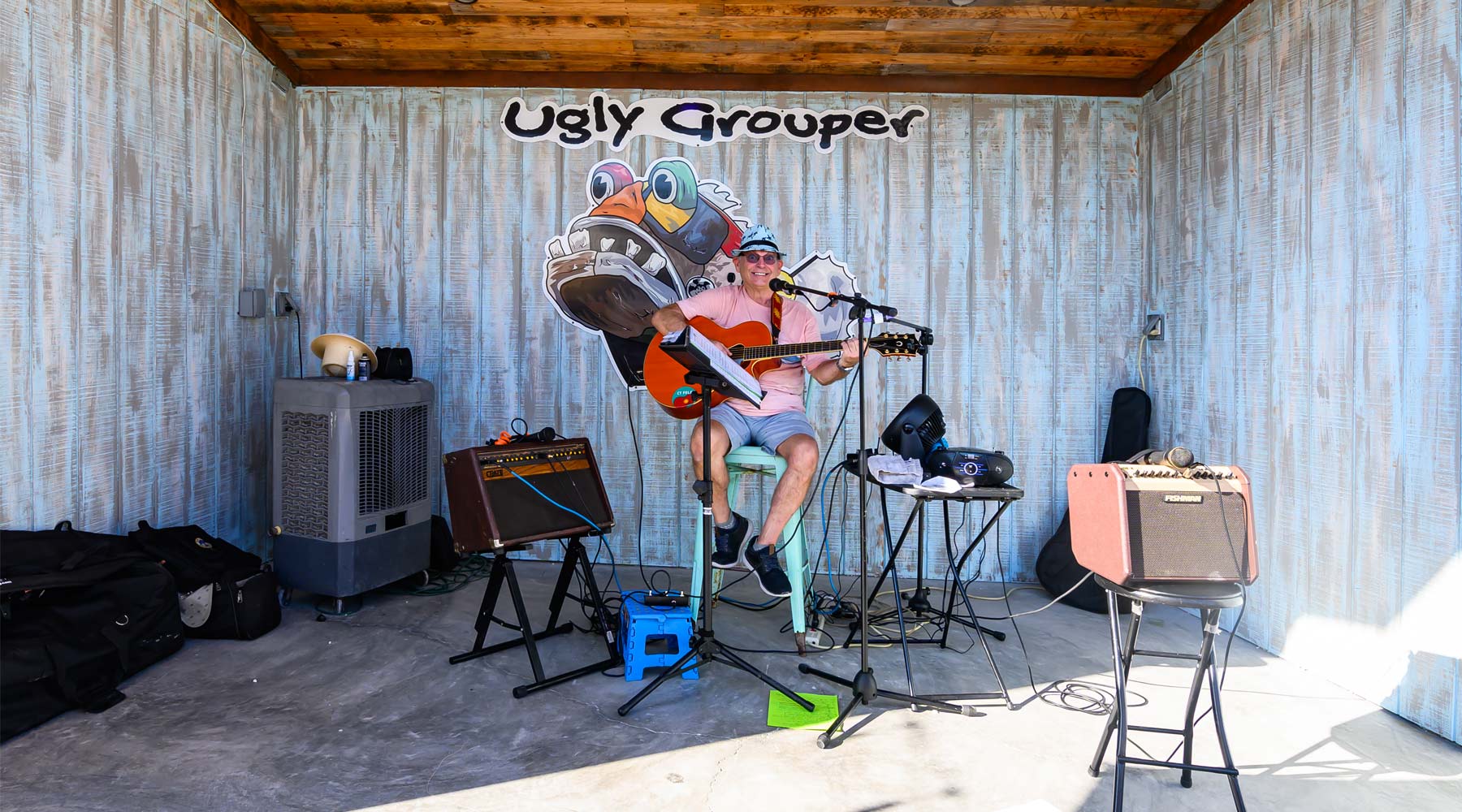 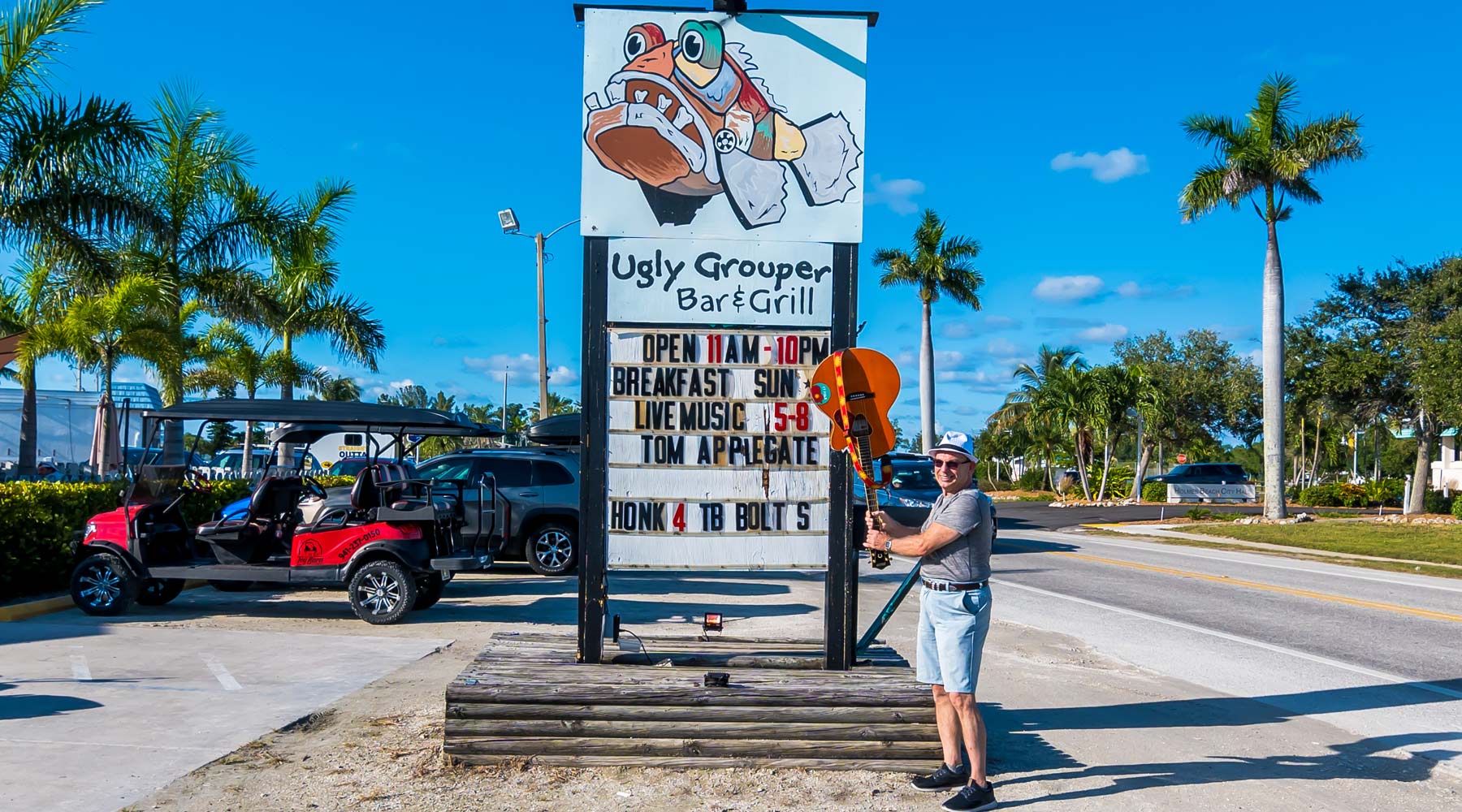 I invite people to sing on stage, shmooze and ad lib with the crowd, and make people laugh with my spontaneous and respectful humor. I expect to have a recording contract soon. My songs are on the web site which can be purchased.

My act is unique in that it is interactive, energetic and compelling due to my uniquely refreshing engaging personality. 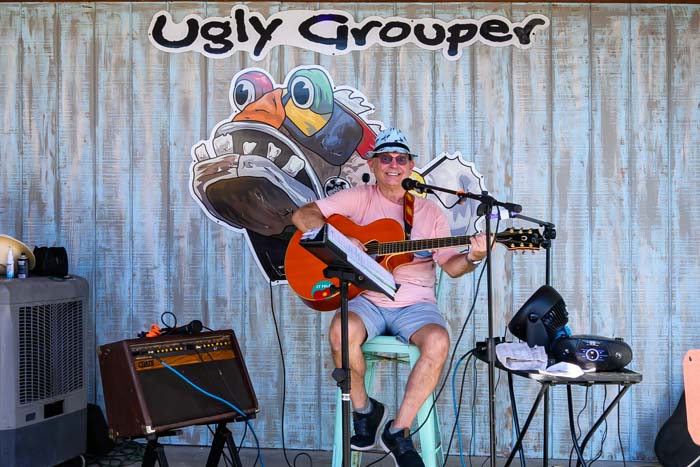 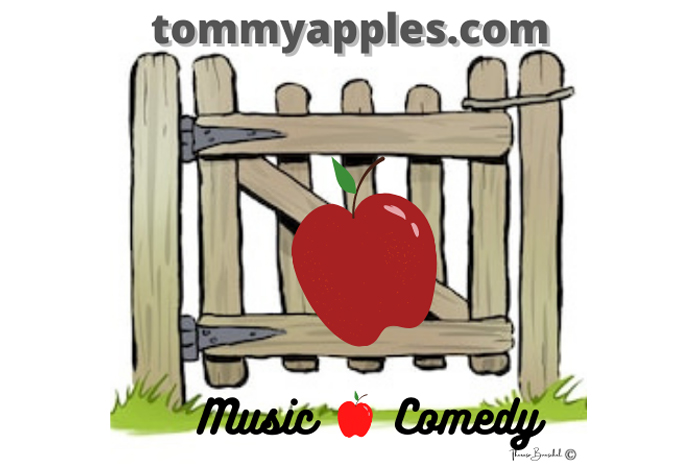 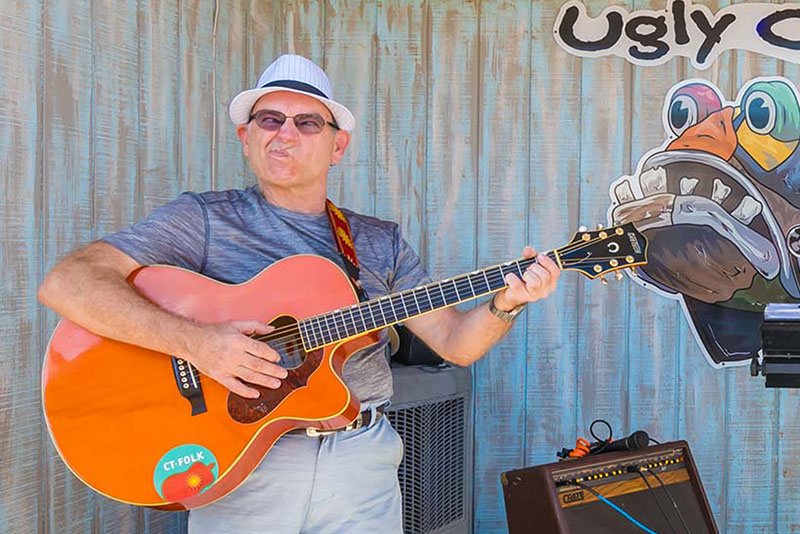 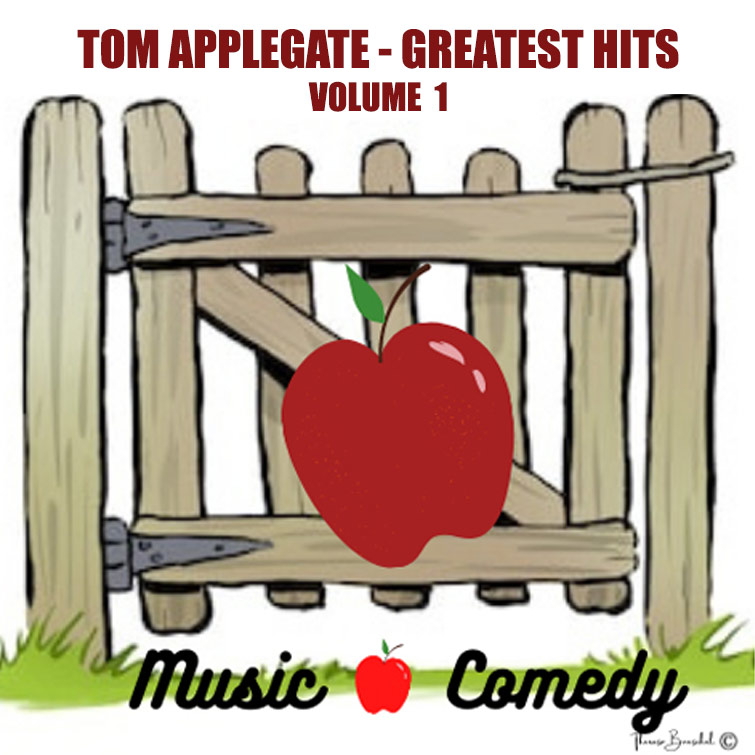 FOR A LONG TIME

NOTHING I COULD DO

NOT A DAY GOES BY 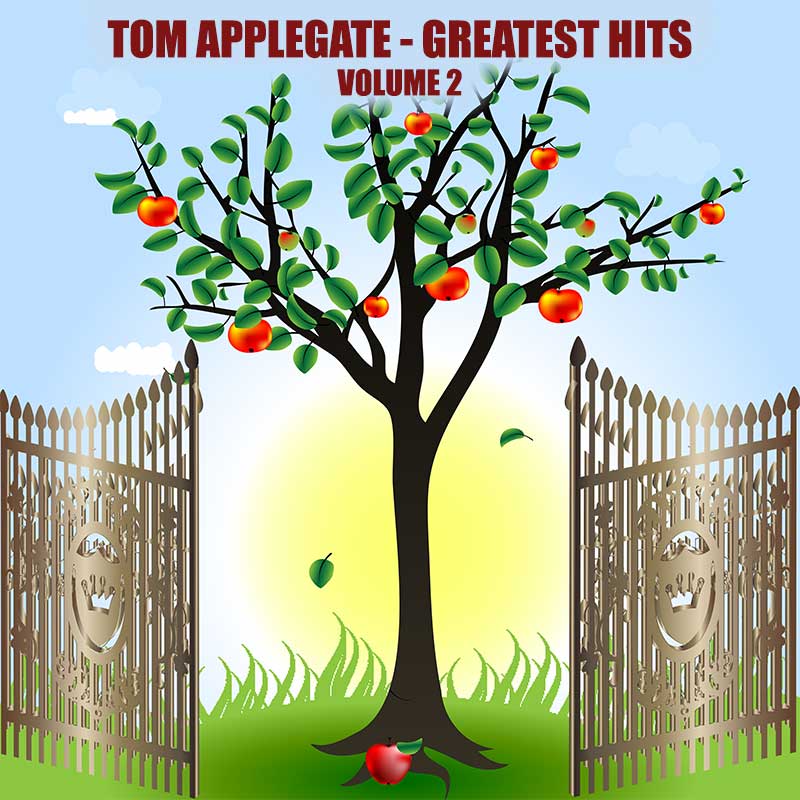 WAITING IN THE WINGS

I MET SOMEONE ELSE

YOU LOVED ME ONCE

I’M SO OVER YOU

THIS LOVE OF OURS

Record Companies will be chosen by how close they convey the virtues of Clive Davis.

All songs under copyright laws from The Library of Congress. Any publication of these songs in any form or manner without written permission by the author will be punishable accordingly by the U.S. copyright laws.

The Ugly Grouper is THE place to be on AMI! Live music every day, family & pet friendly, local seafood, and signature cocktails.

This is how my career at songwriting began:

My first attempt at writing was a poem I wrote in sixth grade at Kellum Street School for a class contest; “Keep Kellum Clean”.

I remember classmates Joey Gebbia and Irene Crolius were in the finals and she blurting out to me on the bus “A poem isn’t an essay. You will never win”. They both wrote essays.

Nonetheless soon after it was announced on the loudspeaker before classes began that I had won! I was shocked and elated. As my poem was being read out loud to the whole school ,I knew I had won the contest with these last two simple poignant lines of my prose:

So don’t be a litterbug like some people know keep Kellum clean wherever you go.(A strong ending.)

The prizes were a notebook, pencils and pens. But the confidence and recognition were the inner rewards that still remain in my being today.

I graduated in 1969 from Lindenhurst High School, got married in 1979 ,received a Masters of Social Work from Fordham University in 1983, raised a family in New Haven, Connecticut, divorced in 2011 and currently live in Florida as a professional musician.

I never had a guitar or singing lesson in my life and I don’t read music. I wrote all the lyrics and music for all the songs listed on the site. The songs span from 1974 to the present.

Footnote: Irene was chosen over me for the High School Choir when someone dropped out so she got the last laugh. 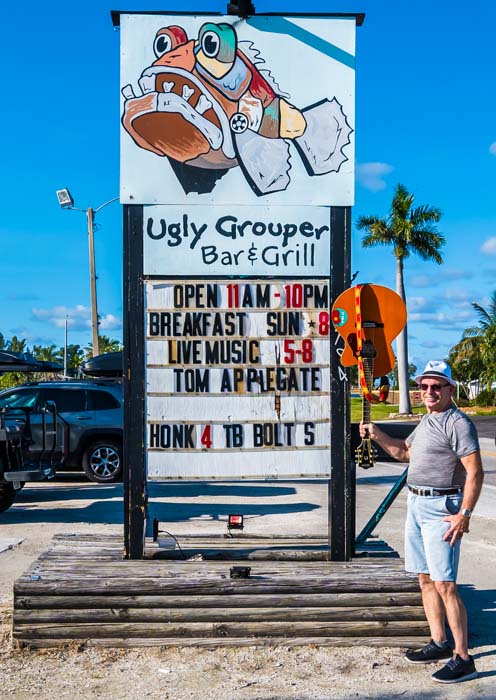